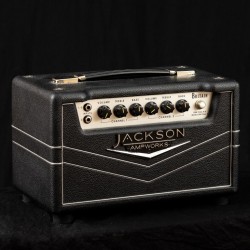 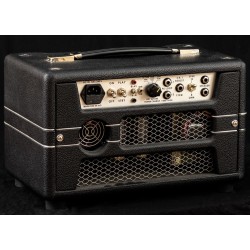 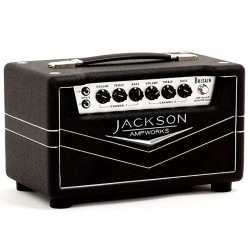 The Britain 4.0™ is the smallest, most flexible and portable British style guitar amplifier ever made! With 4 distinct power settings and two blendable channels, the Britain 4.0 offers more tone and more value than any amp ever made!

If you are looking for one amp that will cover all the classic British guitar tones of the last 50 years along with a host of new tones never before available then the Britain 4.0 is your amp!

With careful consideration of the feedback from users of the original Britain and the Britain 2.0, Jackson Ampworks has totally redesigned the amp to become the most pristine, versatile, and compact boutique amp on the market today. The new Britain 4.0 is 18 pounds lighter than its original predecessor, 8” more narrow and 3 times more powerful! In addition to these changes we added a second channel to the amplifier, a unique footswitch-able boost circuit for the Britain’s now legendary EF86 channel, series effects loops for each channel, and selectable 15/25/30W Class A or 50W Class A/B operation that features 2 different sets of output tubes for unmatched versatility! Given the combination of features, performance and price, we think you’ll agree that not only does the Britain 4.0 offer Small Size and Huge Tone, it also offers a Tremendous Value as well! Two Channels. Infinite Tones.

The Britain 4.0 features two totally separate channels, each with its own set of dedicated tone controls. While two channel amps have been available for any years, the magic of the Britain lies in its ability to blend those two channels together to create an infinite number of tonal options! Channel 1 is the exact same EF86 based preamp that was featured in the original Britain but has been updated with our own footswitch-able boost circuit that true bypasses the Treble and Bass controls resulting in a substantial boost in volume, gain and tonal purity. Channel 1, being the higher gain of the two, is considered the dirty channel of the amp and offers a very broad frequency response that works to deliver your instruments true voice with minimal coloring or artifacts. Channel 2 of the Britain 4.0 is a 12AX7 based “Top-Boost” preamp that balances perfectly against Channel 1 by providing pristine clean tones incredible headroom and articulation. This channel, which was designed to remain clean longer than Channel 1, embodies the very definition of clean British guitar tone but is enhanced with increased richness and depth. Channels 1 and 2 are internally linked so that the use of the input labeled “1/2” sends the guitars signal to both channels equally. In this arrangement, each channel is active along with its associated tone controls and blending of the two channels is a simple as adjusting the Volume control for each channel. The true advantage of this type of arrangement lies in the ability to blend Channels 1 and 2 together while still allowing tonal shaping of each channel via their respective Treble and Bass controls.

Plugging into the input labeled “2” breaks the internal connection to Channels 1 and 2 thereby allowing them to function independently. This feature allows the musician to use a completely different signal chain (floor based effects etc.) for each channel if desired, and is fully expanded by the use of an ABY box to select channels 1, 2 or both. With all of these tonal options available, the Britain 4.0 truly delivers Two Channels, Infinite Tones. So Versatile It’s Like Having four amps in one!

The Britain 4.0 is the only amp anywhere that offers switch-able power output of either 50W Class A/B using EL34’s, 25W Class A using EL34’s or 15/30W Class A using EL84’s. This adjustable power feature allows the player to tailor the amps response and tone to any given musical setting. In high volume situations, select the 50W mode for maximum volume and clean headroom. When less volume is desired, select the 25W or 15/30W mode and enjoy the early breakup and harmonic richness that only comes from low power Class A operation. The inclusion of the 15/30W Class A power modes using EL84’s extends the tonal range of the Britain 4.0 by lowering the amount of headroom even further and allows for overdriven tones at a lower volume along with the characteristic chime and sparkle that is inherent in EL84’s. When in 25W and 15/30W Class A modes, the Britain 4.0 is cathode biased and features a proprietary circuit that exactly reproduces the natural compression and sustain of a 5U4G tube rectifier. These features give the Class A modes their own unique voice and a softer, more spongy attack. In 50W Class A/B EL34 mode, the Britain 4.0 switches to high voltage operation and is fixed biased. The combination of high voltage and fixed bias allows the Britain 4.0 to have a very quick and aggressive attack with increased headroom and volume.

Each of the 4 power modes have been developed to add versatility and character to the tone while giving the player the ability to carry one small amp that will work in any musical setting. Given its power and performance, the Britain 4.0 really is like having four amps in one! Standard Features: Channel 1: EF86 Preamp with Volume Treble and Bass Controls. 15/30W Class A, 25W Class A and 50W Class A/B Rotary Switch on back panel. Channel 2: 12AX7 “Top Boost” Preamp with Volume Treble and Bass Controls. Power and Standby Switches on back panel.

EL84 Power Tubes provide 15/30W of Power in Class A modes. EL34 Power Tubes provide 25W of Power in Class A mode and 50W of Power in Class A/B mode. External Locking Bias Trimmer and Test Points on back panel. Boost Footswitch for Channel 1 that disables the Treble and Bass controls and provides gain and volume boost and front panel LED indication. Power Entry Module that allows switchable 120/240VAC operation. Series FX Loop for Channel 1 and Channel 2. Mains and B+ Fuses on back panel. 8-16 Ohm Speaker Impedance Selector Switch Dual Speaker Jacks on back panel. Seamless FX Integration. To make the Britain 4.0 even more flexible, we have incorporated a series FX loop for each channel. Much the same way using two inputs gives maximum flexibility, having a dedicated FX loop for each channel allows the player an unprecedented amount of control. As an example, with this configuration, the musician could insert a reverb or delay unit in the Channel 2 FX loop to expand his clean tones while at the same time leave Channel 1 dry to optimize his/her overdriven sound for greater punch and clarity. The same goes for each channel. With this setup you can add effects to either channel, both channels or neither channel. You have complete control.

the Britain 4.0 is hands down the best built, most versatile and cost effective amplifiers anywhere. And while you can certainly find many amps in this price range, you can rest assured that none of them offer the flexibility that the Britain 4.0 offers. Consider that when using the Britain 4.0 you have at your deposal all of the classic tones found in the the most popular Vox, Matchless and Marshall amps of the last 50 years plus all of the new tones available with the boost feature and the blending of the two channels!

All of the features listed here work to make the Britain one of the most revolutionary amplifiers on the market. With features like small size, tonal flexibility, switch-able power, bulletproof construction and great value, the Britain 4.0 is poised to redefine the boutique amplifier market.

Since Jackson Ampworks began in 2003, we have established ourselves as a premier manufacturer of the highest quality amplifiers available and we are proud to say that with the launch of the Britain 4.0, the quality of construction methods used in our amplifiers have only improved. Quality to us is more than just a bragging right, it is a critical component in every amp that we build. This commitment to quality is such a cornerstone of our business that each amplifier that we build undergoes a 3 day torture test to make sure that by the time it gets to the player, we have done everything we can do to make it fail.